The guys are back! 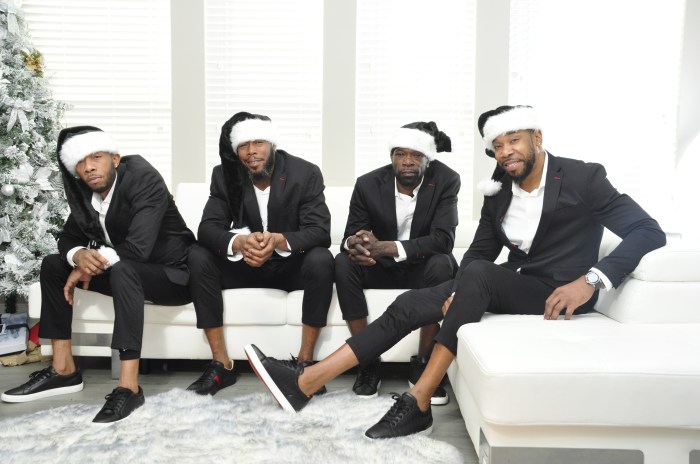 Soul For Real is back and spreading holiday cheer with a new video for silky smooth “Silent Night” cover that will give you the warmest fuzzies just in time for Christmas.

Comprised of brothers Choc, KD, Bri and Jase, the unforgettable quartet is best known for its platinum and gold-certified singles from the mid-1990s, “Candy Rain” and “Every Little Thing I Do,” as well as the hit “If You Want It” from their platinum-selling debut album “Candy Rain.”

Formed in 1992, Soul For Real signed with Uptown Records and released their debut album under the production of the legendary Heavy D.

The title single from the project hit No. 1 on Billboard’s Hot R&B/Hip Hop Songs and peaked at No. 2 on the Hot 100 Chart.

After touring and the success of their debut album, the group began working on a sophomore album “For Life” produced by Sean Combs. They continued to see success over the years and have released multiple albums and singles. Most recently, “Love On Me” earlier in 2020.

This year marks the 25th anniversary of the group being in the music industry which is noteworthy considering all they’ve been through over the years and the many challenges that often led them to consider walking away from the group and turning to independent endeavors.

“We’re bringing back the classiness of the themes and images that come with this kind of music,” Brian said.

“We’re trying to raise the bar from grunge and the complete disregard for respect that is often associated with Hip Hop and R&B.

We were a breath of fresh air in ’95 when we came out, bringing a new sound. We’re doing the same thing now. We want to let people know it’s OK to have chivalry, to be respectful to women and men. It’s OK to have respect for every single person. Everyone deserves love and respect.”

Stream “Silent Night” here and be on the lookout for new music from the guys in 2021.

Gucci Mane’s Artist Foogiano Burns Off Ankle Bracelet & Is On The Run: Report

On Thursday (October 21), rumors began to circulate after fans noticed that Lil Durk’s Instagram profile was bare. It gave all the signs of being deleted and soon, people were patrolling India’s Instagram page, as well. When the public couldn’t find images of Durk, rumors quickly spread that there was trouble in paradise.

Keke Palmer is officially adding author to her list of accomplishments. The multitalented 28-year-old has been booked and busy literally as she has teamed up with Amazon Original stories to release a series of  5 new short stories, the series, entitled ‘Southern Belle Insults’ written by Palmer with support from New York Times bestselling author Jasmine Guillory. The five stories Keri on The Loose, Sohpie Dreams Big, Chelsea’s Werk Week, From The Desk of Lady Miss, and My Dear Friend Janet to be released on November 9th digitally on Amazon Prime and Kindle with the audio version of the collection voiced by the actress in character as her alter ego  Lady Miss Jaqueline.  Prime members will be able to listen and read for free.  The series is based on her viral videos of the comedy skits of the characters on both Instagram and TikTok accounts.  “”I am excited to share more of her complex world with her existing fans and introduce her to new readers on this journey filled with humor, inspiration, and self-discovery! Translating these on-camera personas to paper was a true labor of love, and I’m grateful to Jasmine Guillory and the Amazon Original Stories team for believing in my vision. I am incredibly proud of this short-story collection and can’t wait to unleash Lady Miss while introducing Janet, Chelsea, Keri, and Sophie to the world.” States Palmer in an exclusive interview with Entertainment Weekly.

Click HERE  For more information on her books and to see all the artwork for the collection. You will not want to miss the magic….or the wigs” Palmer states in a recent Instagram post. And we will be there for every wig, voice and character change. Congratulations Keke!