The Saweetie meal is currently one of the most popular menu items at McDonald’s. Now, Saweetie and McDonald’s are showing they are still icy, revealing new merch to celebrate the meal collaboration.

The new merch line has items from trucker hats to Saweet Tea and colorful oversized sweatshirts. The unisex collection highlights Saweetie’s love airbrush. More than 10 vibrant and pastel-colored designs highlight her love of sports, palm trees, and the meal, including the Saweetie ‘N Sour sauce.

“Now ya’ll know I stay dipped in the latest fashion, so it was only right I drop some icy merch to celebrate my McDonald’s collab,” said Saweetie. “There are so many oversized pieces that I love – like my favorites: the Saweetie ‘N Sour Hoodie and Fry Tees.”

Eva Marcille Stars In Tyler Perry’s “All The Queen’s Men”!!!

Bound by their love for hip-hop and each other, Eternia and Mr. Lif share “The Story of Us” for the latest single off Eternia and Rel McCoy’s collab LP, FREE. The track boasts Rel’s warm production paired with gripping rhymes from Eternia and Lif who explore their lives leading up to the day they met. It’s a beautiful track made all the more stunning with Eliki’s haunting vocals.

“The Story of Us” is available now through all major digital retailers and streaming platforms and can be purchased for instant-grat off the duo’s forthcoming collab LP, FREE, which is set to drop next Friday, Sept 24 via Fat Beats. In addition to Lif, the 12 track LP includes guest appearances by Shad, Wordsworth, SHEAL, Phoenix Pagliacci and more, and will be released on vinyl in limited quantities.

Ruh-Roh! Are “Dear White People” sweeties Sam and Gabe hitting a bump in the road this season? 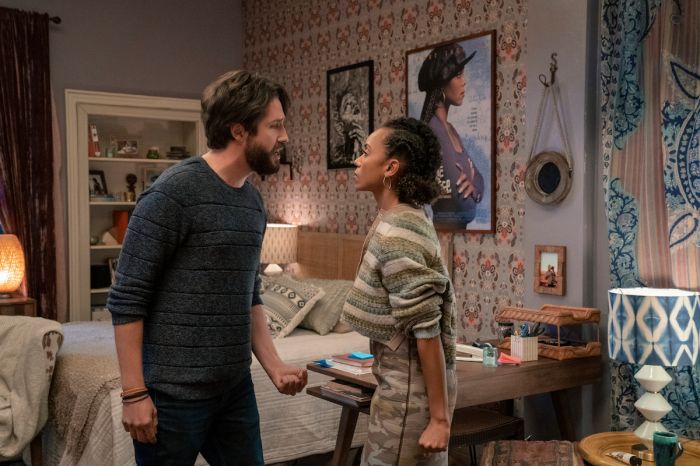 BOSSIP’s Sr. Content Director Janeé Bolden spoke with “Dear White People” stars Logan Browning (Samantha White) and John Patrick Amedori (Gabe Mitchell) about Vol. 4 being a musical season and their reaction when they first found out. Needless to say, the actors were happy about the news.

“We’ve always talked about a musical episode and how fun it would be so when they decided to do a whole season what was I going to say, ‘No’? ” Amedori recalled to BOSSIP. “We were given the opportunity to be in a musical. Come on, let’s do it. ” 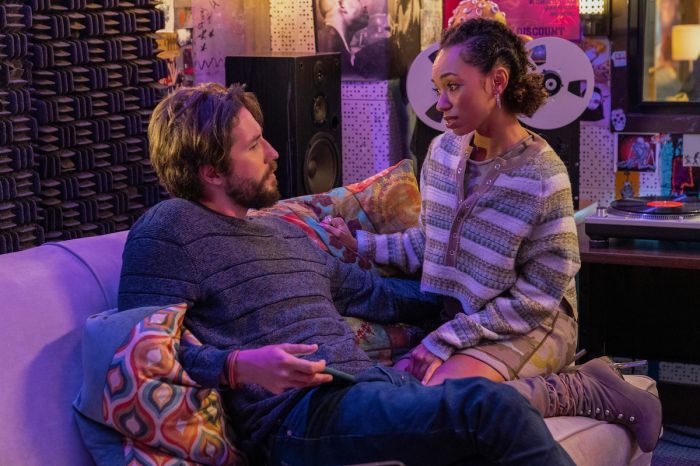 When asked about his favorite song to perform this season he didn’t hesitate to answer with N’Sync’s hit breakup jam: “Bye, Bye Bye.”

“That was also really good too because, Logan and I the way we work together, from the previous recording to the day of shooting we kind of choreographed, well our choreography within the fight, and let us do the scene as a real fight with how we felt, it just felt really good it kind of came together, that’s definitely a highlight for me,” Amedori told BOSSIP. 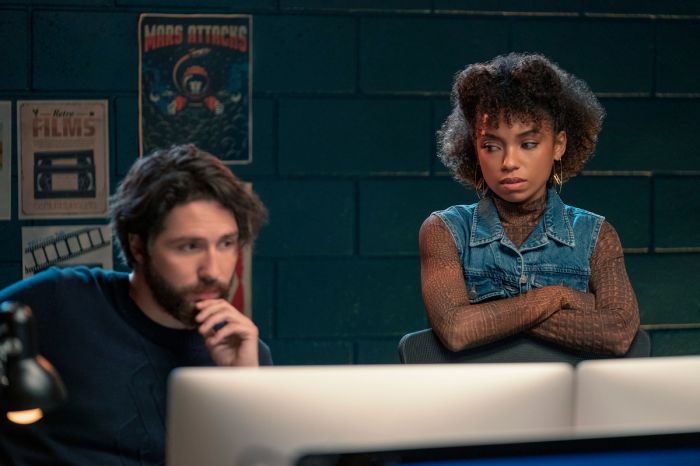 For folks who aren’t fans of the show, Browning and Amedori both play film students/filmmakers and much of Vol. 4 revolves around their projects and what they decide to keep and leave out. We had to ask if there were things from the actual show that they were sad to see cut from previous seasons.

“I definitely have things that didn’t make it, but,” Browning paused before telling BOSSIP. ” No that would be a spoiler. There is something — there are things.”

“In general, at least I know joke-wise, I know that nobody was safe ever and I really enjoyed that aspect.” Amedori told BOSSIP. ” There was never a moment of ‘was that too much?’”

“I know, ” Logan interjected. “So we shot episode 8 of season two, part of one scene as a oner — where John Patrick and I and the camera operators were all moving in tandem, which we all thought was going to be one long cut. It ended up being cut up, which worked for the episode, but we were doing it so they wouldn’t have to cut but that’s very ambitious. That was one thing that was very hard to shoot.”

Sounds intense right? Well these two actors are very intense about their craft.

“We loved it!” Browning told BOSSIP.

“We couldn’t wait,” John Patrick Amedori added. “We spent an entire night going over it so by the time we brought the crew in to watch the rehearsal, we went full board we were 110% the entire time. We were ready to go. We were doing a performance.” 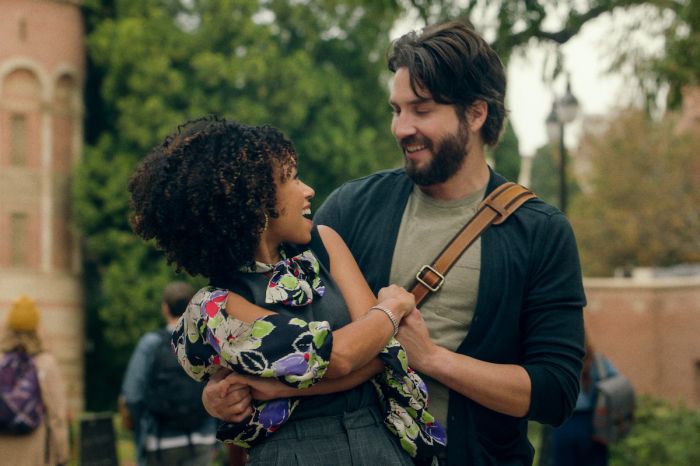 The show is named “Dear White People” after Browning’s character Sam’s controversial radio show. In the final season, Sam continues to catch hell from other Black students for her interracial relationship with Gabe. As “Dear White People,” primary white character we wanted to know what Gabe learned in the show’s four seasons.

“He’s a guy who steps in it along the way,” Amedori told BOSSIP. “He steps in it in a relationship with a girl that he’s madly in love with, he messes it up and she forgives him. To know that he means well. That’s her nature. It’s a good balance for them being in the relationship because when he puts his foot in his mouth he’s essentially putting both of their feet in her mouth.”

Amedori’s unintentional play on words draws laughter both from BOSSIP and Browning, who responds, “That is very John Patrick. I don’t know what made me go back and look at an interview we did at the Paley Center and your answers to this question were so sus, I was like cracking up.”

“I have weird metaphors that start turning in my brain,” Amedori explained to BOSSIP. “They make sense to me and I just hope that they make sense. Which is kind of how I exist as a person.”

Amedori finished his thoughts by saying he didn’t think Gabe would be the person he ends up being (this season also includes a look at most of the key characters 20 years in the future) without having known Sam.

Watch the full interview below:

We’ve really enjoyed watching this relationship blossom over four seasons and can’t wait for the rest of the world to see how Vol. 4 plays out. 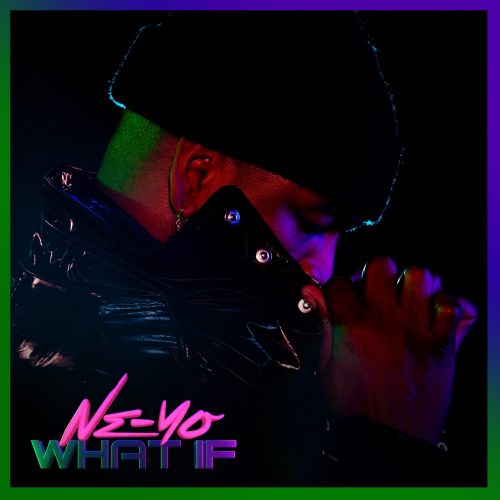 Ne-Yo has returned with a brand new single called “What If”.

No word on what forthcoming project this song will appear.

Listen below via Apple Music: