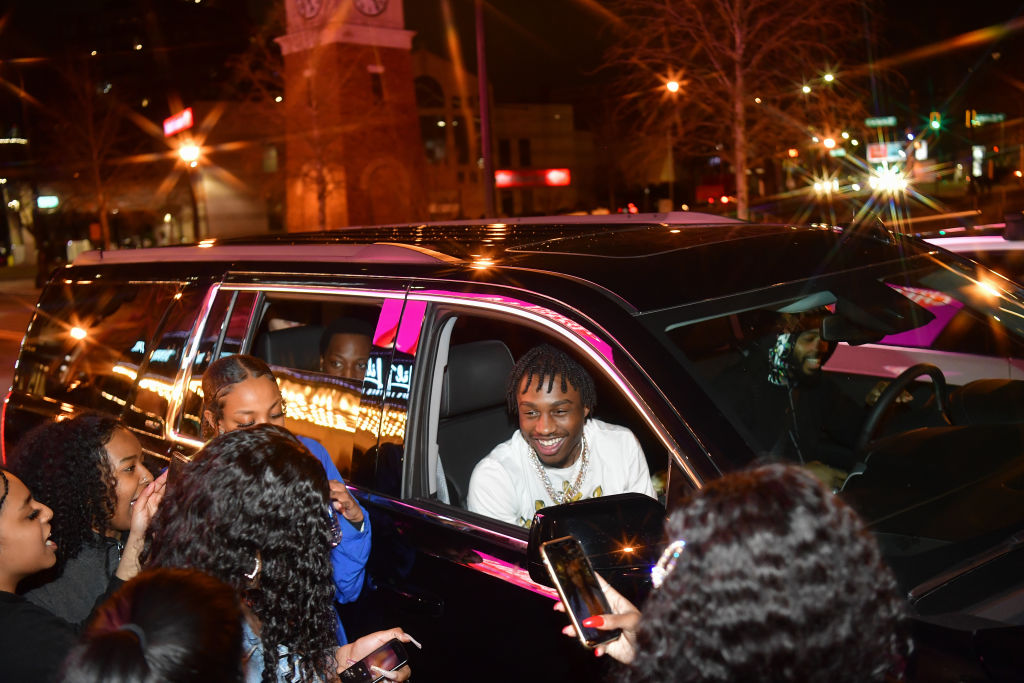 Do the Hip-Hop cops have some quotas they need to meet or what? Rapper Lil Tjay was detained, but reportedly not arrested, after his vehicle was searched—all while he was shooting a new music video.

Last time for real Lol nfs who ya want on this? 😡🤔 pic.twitter.com/G2asJnmnpG

According to TMZ, the “Pop Out” rapper was shooting the clip when NYPD figure it was good enough time to search his whip.

The 19-year-old rapper was shooting the vid when cops searched his car. Lil Tjay hopped on Instagram during the stop and recorded it.

A crowd gathered around the vehicle as NYPD cops conducted the search. It’s unclear if anything was found.

A crowd gathered around to watch what happened. Lil Tjay, who is one of the biggest new rappers of last year, was not arrested.

Tjay has had trouble with the law in the past, but it’s unclear if that had anything to do with the encounter.

We contacted the NYPD to find out why they stopped Tjay … they said they are putting together a response and would let us know.

The Bronx-born rapper is currently signed to Columbia Records.

Lionel Messi Says He Wants To Play In The United States

It seems like dressing up for Serena with her daughter Olympia is the activity that puts the ultimate smile on her face as well as ours as it’s what we do every time we see the pair on our timelines. Lately, the Tennis Pro, entrepreneur, and mom has been taking to Instagram to show off matching looks with her and daughter in everything from custom red carpet looks, pajamas, and swimsuits.  The mommy-daughter duo stunned in a custom David Koma look on the red carpet at the premiere of the biopic ‘King Richard’.  They even appear in a Stuart Weitzman ad in matching white dresses where  Serana discussed in the ad that the best part about being a mom is having the responsibility and waking up every day to see her (Olympia) so happy to see me a feeling that she never thought she would experience,  Whether custom made or gifted its obvious that matching with Olympia is Serena’s happy place.  Take a look at the looks we couldn’t get enough of.

It’s the most wonderful time of the year! After making it through the whirlwind that was 2021, Spotify has finally begun sharing a compilation of the music and musicians who made the past 11 months at least a bit more bearable.

While many of us are still waiting to see our individual results in the app, the streaming platform has unveiled which songs and albums were most popular amongst users. Olivia Rodrigo’s “drivers license” takes the cake for the U.S.’s most streamed song, followed by her other pop hit, “good 4 u.” Doja Cat and SZA’s TikTok anthem “Kiss Me More” came in third, followed by “Heat Waves” by Glass Animals and Dua Lipa’s “Levitating” featuring DaBaby.

As far as most streamed artists go, Drake cemented himself as #1, which isn’t a major surprise. Behind him is Taylor Swift, the late Juice WRLD, Kanye West, and Bad Bunny, almost all of whom shared super hot new projects already this year.

Check out more of this year’s biggest successes below, or find Spotify’s full round-up here.

In an era where plenty of rappers dish out numerous projects a year, Roddy Ricch has always weighed quality over quantity. The release of Please Excuse Me For Being Antisocial came after a year of anticipation and arrived at the tail end of 2019. Nearly two years after the release of his debut album, the rapper is finally gearing up to drop off sophomore project, LiveLifeFast.

Yesterday, the rapper shared the album cover throughout his social media pages without any formal announcement. Roddy switched out all of his profile pictures to the cover art, leading fans to believe that new music was officially on the way before the year ends.

It looks like the speculation was correct, after all. Roddy Ricch took to Instagram this morning where he formally announced that LiveLifeFast will be arriving on December 17th, nine days after the two-year anniversary of PEMFBAS. The rapper shared the release date with a clear glimpse of the cover art which features the rapper holding his double R chain in what appears to be a speeding Rolls Royce.

Roddy Ricch might be a little late, once again, to declare find himself on any year-end album lists but the release of his new album will bring some new bops to close out 2021 and kick-off 2022.

Check out the official cover art and release date below.