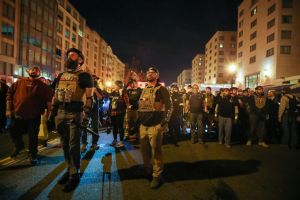 Enrique Tarrio, the chairman of the far-right extremist group Proud Boys, was arrested by D.C. police Monday (Jan. 4) for an act that took place last December. A warrant was out for Tarrio’s arrest after taking a Black Lives Matter banner from a well-known Black church then burning the flag.

The Washington Post reports that Tarrio was apprehended by officers from the Metropolitan Police Department just after crossing state lines according to a D.C. police spokesperson. That spokesperson said that Tarrio had just arrived via plane to the area, assumably Reagan National Airport.

Tarrio, who resides in Miami, Fla., was charged with one misdemeanor count of destruction of property after the BLM banner was taken from the property of Asbury United Methodist Church in Northwest Washington. Terrio admitted to The Washington Post that he was among a group that took the BLM banner and burned it in protest.

Cops also charged Tarrio with two felony counts of possession of high-capacity ammunition feeding device after they were found in the vehicle after Tarrio’s arrest.

Washington authorities are bracing for a much-publicized rally hosted by the Proud Boys, a group that espouses far-right ideologies and only allows men in their ranks. Terrio, who identifies as Afro-Cuban, has been the chairman of the Proud Boys since 2019.

As the ripping of the BLM banner from the church was a potential hate crime, however, those charges have yet to surface as of Tuesday (Jan. 5). Terrio said that he would plead guilty and pay fines to the crime but will not admit to carrying out a hate crime. In Terrio and the Proud Boys’ view, they believe Black Lives Matter has carried out terroristic acts.