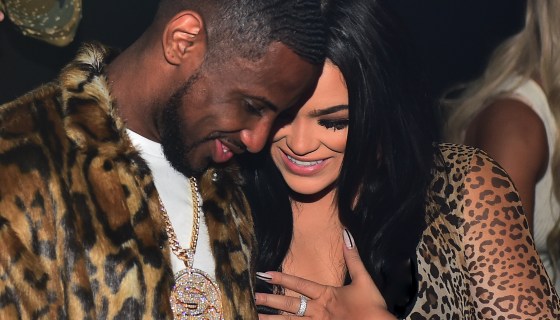 We don’t know why Fabolous refuses to stay low and rebuild his marriage to wife Emily B after the now infamous domestic violence saga but he seems determined to prove that everything’s all good .

So determined, that he’s posted more than a few pics reaffirming his love for Emily B whose teeth he allegedly knocked out during a reported altercation in 2018.

In his latest stunt, the soon-to-be grandpa attempted to make love “cool” again while showing affection to his forever not-quite-wife of 10 years.

“I know the cool of this generation is being savage & not giving a f*ck.. And all the rap songs say money over everything & everybody is sleeping wit somebody else’s man or woman.. But fa real.. having a partner to love, share life with, raise a family together with, & make each other better is real GOALS. That’s the real COOL. That’s really WINNING!! Love You [Emily B.]”

Fab and Emily have come a very, very long way since the messy domestic incident that nearly shattered their happy home.

Fab was charged with aggravated assault and terroristic threats for allegedly punching Emily in the face and threatening her father during a domestic dispute at their home in Englewood, New Jersey.

Last month, the couple went on baecation in Aruba where Emily was spotted rocking a ring on her marital finger in photos. The baecay came just weeks after Emily gave birth to their third child, Journey Isabella.

At this point, Fab seems to have survived being canceled, divorced and thrown in jail. So yea, if Emily she likes it, we love it.

Do you think Fab got off easy after the situation? Tell us down below and peep the messiest reactions to his sweet Instagram message on the flip.