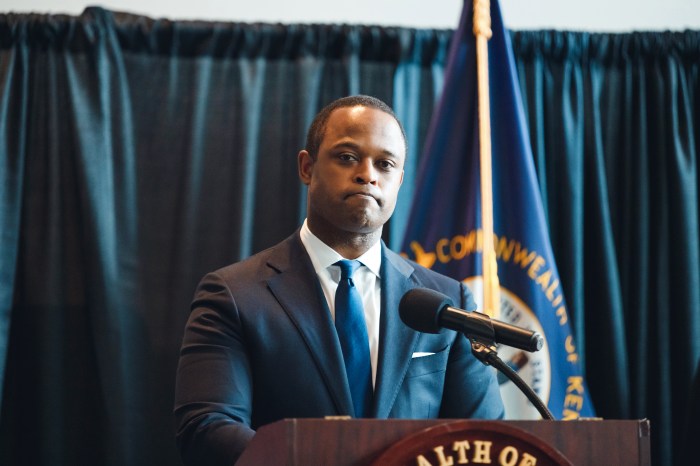 After two grand jurors expressed “frustration” and “disgust” in Cameron ONLY giving them the option to consider “wanton endangerment” charges against Detective Brett Hankison, a petition has been filed to get Cameron out of office.

The Courier-Journal reports that three grand jurors filed a petition with the state House of Representatives on Friday, objecting to the Attorney General’s behavior and calling for his impeachment.

The jurors whose identities are being protected believe Cameron “breached public trust” and failed to comply with his duties by “misrepresenting the findings of the grand jury in the Taylor case.”

They allege that Cameron “deceived the American people and the citizens of this Commonwealth with regard to his office’s handling and involvement” in the Taylor investigation. He, it alleges, “misled the public” when he said the grand jury agreed that police were “justified” in returning fire and used them as a “shield to deflect accountability and responsibility.”

“Neither Cameron nor anyone from his office mentioned any homicide offense to the grand jury. Not only were no homicide offenses presented as alleged, no charges of any kind were presented to the Grand Jury other than the three wanton endangerment charges against Detective Hankinson,” the petition states, according to the Journal.

Ultimately the jurors want him removed from office and disqualified “from holding any office of honor, trust or profit” within Kentucky because he “lied to the Grand Jury by excluding information and charges available to them, then lied to the public about what he had told the Grand Jury.”

“The Grand Jurors did not choose this battle,” said Kevin Glogower, the jurors’ attorney, in a statement. “This battle chose them. These are randomly selected citizens who were compelled to sit on a grand jury and were terribly misused by the most powerful law enforcement official in Kentucky.”

Daniel Cameron’s office previously admitted that “the only charge recommended (to the grand jury) was wanton endangerment”, so that’s proof enough that some action should be taken.

If Daniel Cameron is indeed impeached he’ll be in good company. His homeboy Trump of course was impeached AGAIN, this time on the charge of incitement of insurrection.

Dingy Dorito’s impeachment trial is slated to begin the week of February 8.

Watch an Official Trailer for The DJ Screw Documentary ‘Chopped and Screwed: The Final Mixtape’

Deshaun Watson has made it clear that he wants out of Houston and while he is currently battling numerous sexual assault lawsuits, it appears as though the league is going to allow him to play. For now, Watson is choosing not to play as he no longer wants anything to do with the Texans organization. There are a few teams that Watson would want to play for, and he is simply waiting for one of those teams to make a deal for him.

Over the past few weeks, there have been rumors that a deal with the Miami Dolphins was imminent, although nothing has happened just yet. According to Ian Rapoport of the NFL Network, Watson should expect to be traded by the November 2nd deadline, as sources around the team have indicated that they are motivated to get the deal done.

“Based on everything I have heard, the belief is that something will happen involving a trade and Deshaun Watson before November 2nd. There’s been plenty of false starts and plenty of rumors around this. But the expectation is something will be completed by November 2nd,” Rapoport said. “Here’s where it stands. Multiple teams are still interested in trading for Deshaun Watson. There’s a report going around the league about the Dolphins, they are not alone. Among the teams that have been discussed over the past several months, the Panthers, the Broncos, the Eagles, and some others.”

With that in mind, a trade should come either this week or early next week. There is no guarantee that it will happen although, with both sides motivated to make something happen, it should make for an interesting week. Stay tuned to HNHH as we will bring you all of the latest details.

The Round-Up is Okayplayer’s weekly playlist of the best songs in the worlds of hip-hop and R&B. This week’s set features new music from JPEGMAFIA, Maxo Kream, Black Milk, SahBabii, and more.

Scroll through selections from this week’s sequence of the best songs below and subscribe to Okayplayer’s Spotify channel today.

After a streak of shifty remixes (and a stellar 2020 outing with Rob Milton as Sons of The James,) DJ Harrison‘s first solo single in years is an all-pro exploration of muddy Soulquarian funk.

Helado Negro cooks up a dreamy and entrancing spell on this standout from his new album, Far In, out today via Private Energy.

JPEGMAFIA – “WHAT KIND OF RAPPING IS THIS”

JPEGMAFIA crafts a bit of late-night r&b bliss on this glistening highlight from his new album, LP!, which is out today via EQT Recordings and Republic Records.

Maxo Kream lays out his regrets on a crawling haunt from his star-studded new album, Weight of The World, out today via RCA.

SahBabii returns with some playful lessons on his latest loosie.

Dijon offers another glimpse at his upcoming debut album with a tortured, spacious and twangy ballad.

Black Milk – “Cause I Was Living”

Black Milk blesses the towering second volume of Gangster Doodles’ compilation with a razor-sharp performance. Gangster Music Vol. 2 is out today via All City, featuring appearances from Iman Omari, Dam-Funk, Ovrkast, Liv.e, Lil B, and more.

From the upcoming collaboration album “IRON BARS” by Justin Tyme, check out this animated video “CHASE” featuring a trio of underground greats Canibus, Kool Keith, and the late MF Doom.

Was It Something I Said – Or Didn’t?