“I appreciate and cherish everything that ever happened between us for making me wiser and a better person.”

It’s been a week since departed actress Naya Rivera went missing and then was sadly confirmed dead and now her ex-fiance, Big Sean, has chosen to speak on it publicly. The rapper says he still can’t believe that the women he was once engaged to now permanently gone.

Police evidence presumes that Naya was swimming in Lake Piru with her 4-year-old son and used the last of her energy to shove the child in their rented boat before she sunk below the lake’s surface to never resurface. Big Sean calls her a “hero.”

Rest In Peace Naya, God Bless your Soul! Thank you for blessing us all with your talent and presence. you are a hero! Not just because of how you saved your son, also because of the barriers you knocked down for so many people to make them feel confident in themselves and to stand tall and be proud when they couldn’t achieve that on their own. I appreciate and cherish everything that ever happened between us for making me wiser and a better person. I’m still grieving and in shock, I can’t believe this is real. I’m praying for you and your family and I know your watching over them and protecting them. Rest In Peace Naya.

Y’all are so stressful. 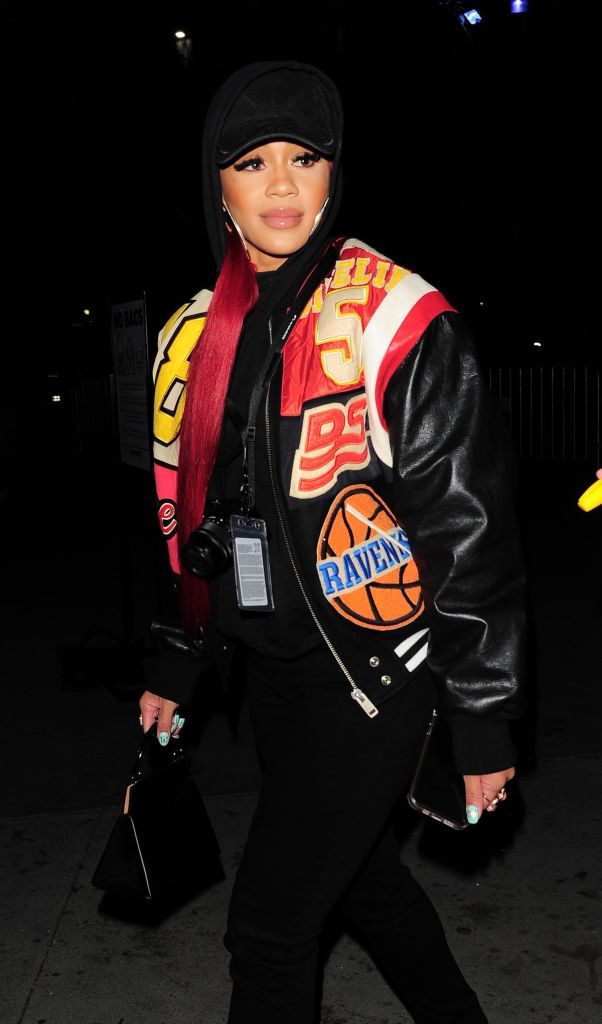 Friday Saweetie stepped out to enjoy some sports. Specifically, the Los Angeles Lakers game against the Phoenix Suns. Sharp eyed fans spotted the Bay Area beauty sitting beside none other than rapper Roddy Ricch and folks were off to the races speculating the pair might be dating.

Y’all… There are only so many prime seats in the arena. Celebs coincidentally end up sitting next to one another all the time, right?!

People were quick to assume otherwise though if these tweets are any indication.

It didn’t take long for Saweetie to address the speculation. She took to Twitter Saturday night saying, “So avoid sitting next to men in public places otherwise the world assumes y’all are dating … got it.”

Well there goes that. We want to see our Icy Girl happy and being loved on so we don’t blame folks for being ready for her to start exploring her options.

Fans will recall Saweetie dated Quavo for two years before going solo from the Migos rapper in March 2021.

Okay so maybe there’s no Westside connection with Roddy Ricch, but who do you think could be a good match for Saweetie?

We’d love to see her dating an A-list actor or maybe a millionaire entrepreneur!

The wife of the late legendary rapper Christopher”Big Pun”Big” Rios spoke out. Liza Rios and her attorney Lita Rosario-Richardson Esq spoke with hosts O’God and SamAnt. During the interview, Liza gave her perspective on the situation involving Joseph”Fat Joe” Cartagena and Big Pun. Liza’s attorney cleared up the rumors that have lingered for more than a decade. Especially, as it relates to the alleged $1 million dollars.

Some people were wondering what really happened between Big Pun and Fat Joe. And, throughout the years we have been given different accounts. There is Rios’s account, and there is Fat Joe’s. I was always told, that the truth lies in the middle. With that being said, Rios shared she never accused Cartagena(Fat Joe) of stealing any money. But Liza mentioned in the interview that the alleged $1 million Cartagena gave her never happened. In fact, Rios admits she asked Cartagena to provide receipts. And, he never did.

It does appear that something went on back then between Rios and Cartagena that was problematic. Especially, since Rios (Big Pun) did not get royalties for songs. And, Rios (Big Pun’s wife) is fighting so that her husband can be paid what she believes he is owed. According to Rios attorney Rosario-Richardson, they are working to get Rios Masters. Of course, the process of a music artist owning their masters is very complex. Rios is a woman on a mission to protect her husband’s legacy as well as his ownership. Who could blame Rios for advocating for her children’s legacy? Hopefully, Rios will be successful.

The 16 New TV Shows You Should Binge This Fall

Fall TV’s expansive lineup of topics and settings are sure to invigorate you. Here are 16 TV shows you should stream this fall.

After a wacky year in which the entire entertainment industry was shaken up due to the pandemic, we can officially say TV is back. Beyond the appetite for TV has growing in 2021, it’s also become a pivotal part of everyone’s lives since millions of people are working from home. Broadcast networks and streaming platforms have taken note of this and have been shelling out options ranging from comedies to dramas to projects based on real-life experiences.

Regardless of which types of episodic series you plan to queue up, this  season’s lineup of TV shows doesn’t disappoint. Fall TV’s expansive lineup of topics and settings are sure to invigorate you and pique your curiosity. Since cold weather is almost in full swing it’s refreshing to have a consistent queue of new Netflix options that are binge-ready. But for those who prefer selections that drop each week, there’s room for you too.

Here are 16 new TV shows you should check out this fall.

Netflix’s ultra violent Korean TV series Squid Game is the most streamed original series of all time on the platform, surpassing Shonda Rhimes’ Bridgerton. The premise: In order to win millions, players must partake in an assortment of childhood games. Each of these games have a twist, if you lose, you die.

Ava DuVernay’s Queen Sugar shared hints that COVID-19 would be looming when last season ended. Now, sheltering at home has ended, and — for the sixth season — the Bordelon family is out and about living their lives as normally as they can amid the pandemic. For Charlie (Dawn Lyen-Gardner) that looks like continuing to explore a relationship with her ex-husband. Ralph Angel (Kofi Siriboe) and Darla (Bianca Lawson) are preparing for the baby while Nova (Rutina Wesley) is battling with the backlash of being a truth-teller and community activist.

Stream now on OWN

Sex Education, by Laurie Nunn, has been serving up some of the wittiest and funniest TV centering sex in recent years. In season three, Otis (Asa Butterfield) and Maeve (Emma Mackey) are battling it out with a new headteacher who is cutting out all forms of sexual expression and also individuality at Moordale. Jean (Gillian Anderson) is counseling again, but she’s also pregnant and figuring out co-parenting. The new season also digs a bit into Eric (Ncuti Gatwa) exploring his life as a Black gay high schooler.

The star-studded first season of Apple TV+’s The Morning Show was a wild ride. In it, Alex Levy (Jennifer Anniston) and Bradley Jackson (Reese Witherspoon) left things nearly unfixable for the network when they exposed them for sweeping unsavory misconduct under the rug. We’ll be watching the new season to see how the network addresses the co-hosts’ attempt at dragging their name through the mud.

Streamers love a reboot. One of this season’s newest is The Wonder Years. Set in Montgomery, Alabama in the ‘60s, a Black family is the center of this scripted series from Saladin K. Patterson. The show is told from the eyes of teen Dean Williams (Elisha E.J. Williams).

Netflix’s Dear White People, created by Justin Simien, decided to take the musical route for its fourth season. Previously coined as a satirical series, its highly anticipated return centers around the star students performing with dance numbers no one asked for. College after all is only four years, so it appears Siemen and co-showrunner Jaclyn Moore wanted to end the series with a bang. We’ll be sad to say goodbye to Joelle (Ashley Blaine Featherson), Coco (Antoinette Smith), Reggie (Marques Richardson), and Troy (Brandon P. Bell).

50 Cent is the executive producer of Starz’s BMF. He seeks to tell the story of two figures that are forever ingrained in hip-hop culture, the fashion community, and the drug game: Demetrius “Big Meech” Flenory and his brother Terry “Southwest T” Flenory. The primetime show starts in Detroit and follows the duo as they rake in money, success, and go after their biggest dreams.

Based on Stephanie Land’s memoir Maid, this gripping Netflix adaptation stars Margaret Quallay as a single mother on her journey rising out of homelessness. Her road is also met with pushback from a violent ex who is the father of her daughter.

For their fourth season of Netflix’s On My Block, the group is officially back to share a new chapter of their East LA lives. The latest season picks up where things left off when Monse (Sierra Capri), Jamal (Brett Gray), Ruby (Jason Genao), and Cesar (Diego Tinoco) were heading into their last year of high school.

Over the last decade the opioid epidemic has taken over both local and national news station coverage. Dopesick: Dealers, Doctors, and the Drug Company That Addicted America seeks to tell a story about a doctor (Michael Keaton) in a Virginia mining town who had first hand interactions with patients who became addicted to OxyContin.

The Waystar Royco family’s return is something that has been widely anticipated since the end of season two in 2019. Middle son Kendall Roy (Jeremy Strong) is once again aiming to take his father down with corporate scandals. This wealthy family is back to its old ways: sneaky alliances, screaming matches, and loyalties being questioned.

Issa Rae’s creation, the HBO Emmy-winning series Insecure, has captured the hearts (and ears) of many since 2016. For its fifth and final season, the show will focus on Issa as a budding entrepreneur and also will give us answers on if her and Molly (Yvonne Orji) plan to rekindle their friendship or call it quits. The cliffhangers that last season left behind will obviously take up space when the show returns. Prepare to see cast favorites like Lawrence (Jay Ellis), Kelly (Natasha Rothwell), Tiffany (Amanda Seales), and even Seqouia (Courtney Taylor).

The Shrink Next Door

Have you heard the story of the Manhattan psychiatrist Isaac Herschkopf (Paul Rudd) who upturned the life of his wealthy Long Island patient Martin Markowitz (Will Ferrell)? This new dark comedy pulling from real-life events explores exactly how Markowitz was manipulated out of money, a home and more by his trusted psychiatrist.

Did we need a series about a family running a private-prison scheme? Paramount+ thinks so. The first trailer for Mayor Of Kingstown is volatile and violent. The main cast features Jeremy Renner, Kyle Chandler, Dianne Wiest, Taylor Handley, and Hugh Dillon. Mayor of Kingstown was written and executive produced by Yellowstone’s Taylor Sheridan, Dillon also receives an exec producer credit.

It’s Tariq Saint Patrick’s (Michael Rainey Jr.) world and we’re just living in it. For the second season of Power Book II: Ghost is caught up in the investigation of his former professor’s death. We’re ready to see the chain of events following this major death and Monet Tejada’s (Mary J. Blige) ongoing power struggle with her son Cane (Woody McClain).

The 16 New TV Shows You Should Binge This Fall